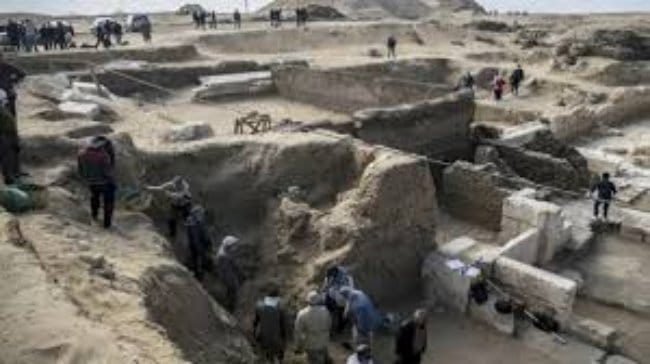 Saqqara is the capital of Memphis, a vast necropolis of this Egyptian capital, and is also part of the UNESCO World Heritage Site as it’s home to not only ancient monasteries but dozens of pyramids and animal burial sites. 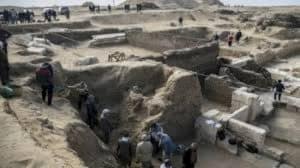 The excavation is done by the team of Hawass near King Teti’s pyramid, the first pharaoh belonging to the Sixth Old Kingdom Dynasty.

According to Hawass more than 50 wooden sarcophagi were found at the burial shaft dating back to the New Kingdom around 16th century BC to 11th century BC) on Sunday.

Hawass also told his team had excavated 22 shafts, including one of a soldier still having his battle axe resting with him.

He said it’s not only a rare but a new discovery as most of the artefacts found date back to the New Kingdom. Till date the findings in and around Saqqara usually date back to 500 BC.

Hawass also said a stone sarcophagus and a papyrus, approximately five meters long containing the 17th chapter of the book of the dead and some wooden boats, masks and some games played by Egyptians in ancient time.

A day before Harass’s anouncemsny the Egypt Tourism and Antiques Ministry had announced about the “major discovery” at Saqqara. They also said the team has also discovered the funeral temple belonging to Queen Nearit of King Teti.

The pyramid of Djoser, considered one of the earliest built pyramids of Egypt, also has its home in Saqqara.

After several delays, the authorities hope in inaugurating the new museum — The Grand Egyptian Museum — at the Giza Plateau, home to the famous Giza Pyramids. They also hope these discoveries will bring a surge in the tourism count, as the tourist decline has surged tremendously after the 2011 uprising and the latest coronavirus pandemic.

A variety of objects were exhibited on Sunday for the press, even as the excavation is going-on as 70% of the area is still not explored.

Jason Momoa Sends Aquaman’s Trident And Much More To A Young...