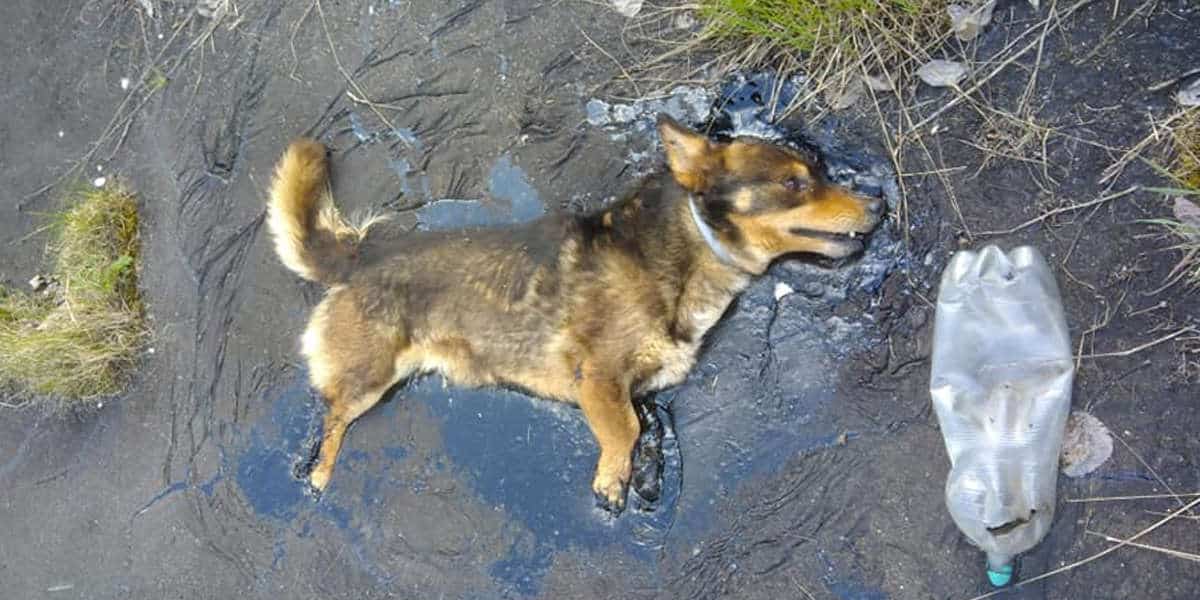 In the beautiful life that we have been given by God the most important thing to have in it is to have faith in you and never lose hope under any circumstance. Giving up is not only seen in human beings but also surprisingly animals have it too. However, giving up is not the best choice in life on could think of is it an animal or a human being. An inspiring occasion has inspired many, due to the efforts that were made by a little dog stuck in a pool of tar.

A group of workers from the town of Suwalki, Poland heard a dog continuously barking amid amid a remote wooded area, they became curious to find out what was going on in the woods. They followed the sound of the dog up to the source of it until they found what they could not believe.

A dog lying down on its’ side in a pool full of tar had been glued by the tar on the surface hence rendering him from moving an inch and the only aid of help he could use was his mouth to bark as loud as he could so that he could get some help.

The workers quickly contacted Joanna foundation, of the Niczyje Animal Foundation. She responded quickly and rushed to the scene where she was called. It is thought that the dog was seeking a place with warmth when he landed in this pool of tar and got stuck.

Godlewska together with a group of firefighters was managed to free the dog from the tar by use of cooking oil and cutting some of the side furs to loosen the dog free from the tar. The dog was hurriedly rushed to the nearest veterinary to get the necessary treatment.

In the treatment zone, the dog stayed for few hours before removing the rest of the tar which was still stuck on his body, and later he has conducted a health examination test where the veterinary pronounced him to be well and sound. The dog was also awarded a name Farcik but still, he has to go through some recovering but after recovery, he is more assured that he is in the best hands of people loving and caring for him. We wish him all the best and quick recovery.

A Couple 77 Years Old Dies of COVID-19, 36 Hours Apart and ‘It’s a Blessing They are Still Together’