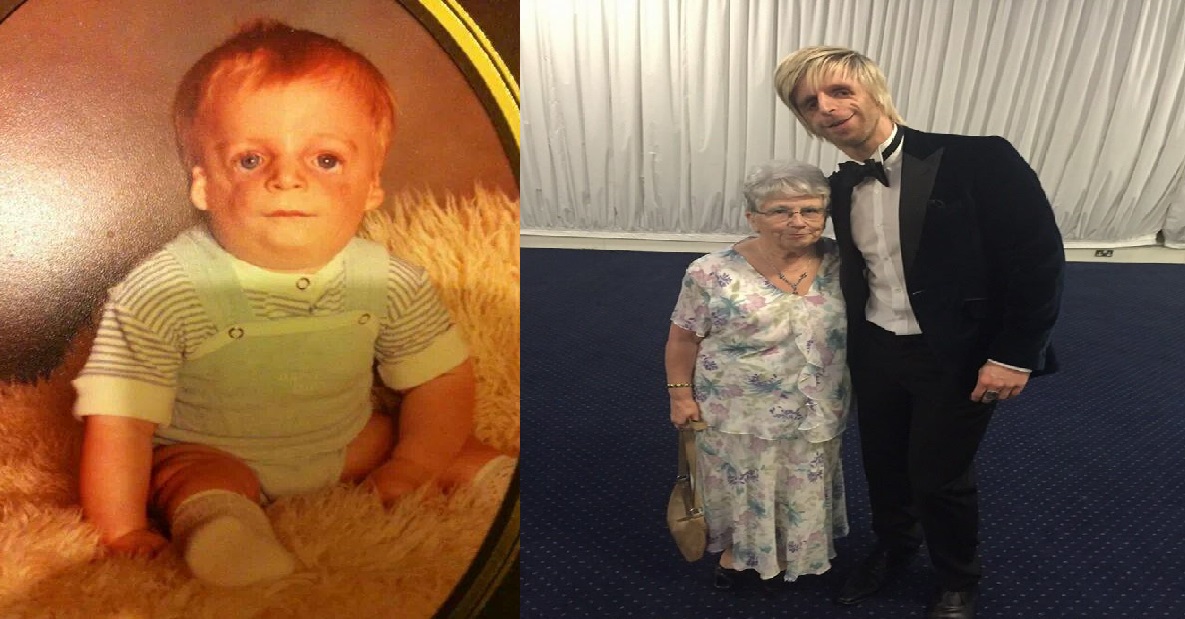 Our story’s hero is Jono Lancaster. Jono was diagnosed with TCS at birth. TCS is a rare genetic disorder that causes problems like listening, hearing and in some cases difficulties in breathing as well. But it does not affect the individual’s intelligence and the most important, the pain of being rejected by your own parents.

According to a survey, 1 in 50,000 people are diagnosed with TCS and as they grow they will typically have eyes slanting downwards, misshapen or undeformed ears and sparse eyelashes.

1 The story of Jono Lancaster, abandoned and taken in by an angel

Today Jono Lancaster may be a happy man but it was not so when he was born. Jono was born in October 1985. When he was born, the doctors told his parents he might never be able to walk our talk in his life. Jono’s parents put him up for adoption when Jono was barely two days old.

But two weeks later, the abandoned baby was taken by a foster mother named Jean. For Jean, the only thing she saw was a little baby that needed caring and she fell in love with the baby the moment she saw him.

Five years later, Jean officially adopted him along with Claire and Stephen and gave him the family he dreamt of.

She might be short in height but the lady has the biggest heart than anyone Jono had met in his life. Jean has been a foster carer for the past 30 years and has loved each one of them.

But, finally Jean decided to adopt Jono, Claire and Stephen and they became a family. Jono calls Jean an angel sent to him when he needed one the most. Today that angel is his mum, his hero.

3 Jono and his long-time girlfriend

Even though Jean loved him dearly, it wasn’t until Jono entered his early 20s, that he finally accepted his looks and stopped shying away. Today he’s 33 and has a long time girlfriend. He met his girlfriend at the gym and from there the love sparked between them.

Today Jono is a vocal advocate for those who suffer from TCS and he uses his own experiences to help others live like him and not shy away from mirrors.

4 Once an unwanted child, today the inspiration of millions!

The child who was abandoned by his own biological parents is today’s avid campaigner and has his own foundation under the name ‘Love Me Love My Face’ and helps raise awareness about TCS and supports families with TCS.

Yes, today Jono is a TV star and a campaigner. He is the ambassador of the charity Face Equality International (FEI) and has created a guide to help parents in understanding and normalising the facial differences their children have and being able to understand them better.

Once a reporter asked him if he had the chance, would he undergo facial reconstructive surgery to improve his face?

Today Jono might be happy with his looks, but the genetic disorder that affected his looks while he was in the womb has caused him to suffer years of anguish both mentally and physically.

The unbearable years of being bullied, multiple operations and uncountable hospital visits. The fact that it’s his genetic disorder that led to his parents abandoning him only 36 hours after his birth.

Though Jono has suffered a lot in his life. But today thanks to the good deed of one angel, he has a home, a mum and a family. Today his speeches inspire others to overcome their disability and face the world.