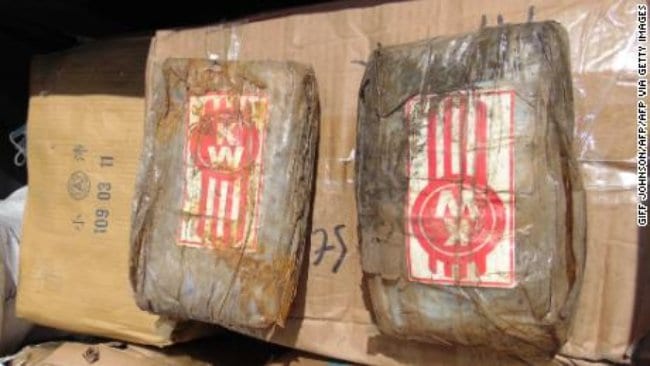 The ship is an 18-foot (5.4 meter) fiberglass vessel and was found on the Ailuk Atoll beach in the Marshall Islands (it’s a coral atolls chain on volcanic islands between the Philippines and Hawaii). The cocaine is wrapped and sealed in blocks, according to the Marshall Islands police report, who collected and destroyed most of the blocks by burning them in the incinerator.

The blocks are stained and the plastic is also yellow with age and a red logo stamp with the letters “KW” is on the packets. The Ailuk is home to around 400 residents who found the boat last week, according to the New Zealand CNN affiliate Radio.

The vessel was too heavy to lift with the cocaine onboard for the residents to lift and bring onto the beach. So, they decided to go inside the boat and investigate, that’s when they found the cocaine bricks.

The Marshall Islands police later confiscated the cocaine packets to the incinerator. The police first brought the drugs to the capital of Majuro and later this week burnt it. Only 4.4 pounds (2 kg) was sent to the US Drug Enforcement Agency for laboratory analysis, according to the authorities.

The haul is approximately 80 million dollars worth and the largest cocaine haul ever to wash up onto the Marshall Islands, according to a report by RNZ.

The authorities say the ship must have drifted from South or Central America and possibly been at sea for the past one-two years.

Well, it might be the first biggest drug haul, but it’s not the first one as the islands of the Pacific area ate one of the major international drug trafficking routes of the world, and previously also drugs have been seized on Marshall Islands.

Back in 2016 a resident found nearly 40 pounds (18 kg) of cocaine, but was arrested for not handing it over to the police immediately; another was in 2018 when a fisherman reeled in 105 pounds (48 kg) of suspected cocaine and just this year again police suspected a cocaine supply might have washed up on Maloelap Atoll that contributed to the drug use exploitation and drug-related health complications.

With so many professionally wrapped cocaine packages washing up shore now-and-then has made the Marshall Islands parliament to establish a special drug task force in May to crackdown the drug haul.