The fans of the great Hollywood actor Chadwick Boseman are still on the mourning mood and they continue to pay tributes to his family for the great loss in the Hollywood acting and his family are facing. Meanwhile, a Nigerian lady has shocked many after she left many people’s mouths wide open after she created a makeup outfit on her face. The make outfit resembled that of the late Chadwick the actor. 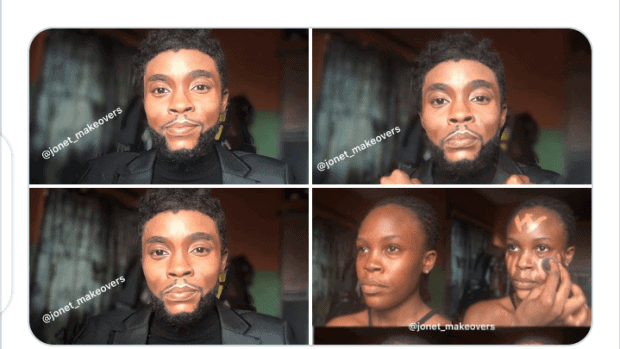 The great actor was well known for the movie title Black Panther which many people loved where he had been given a bigger role. The makeup artist did a marvelous job for she gave a stunning outfit that paid a better tribute to the great actor. The great artist from Nigeria created this resemblance not forgetting every detail of the looks of the late actor she even added the bushy eyebrows that the actor had.

Jane Richard transformed her face to that of Chadwick and she later posted the photos of her on the make outfit to her twitter account. This was a good way to join the millions of mourners all over the world in paying a good tribute to the great actor.

Jane Richard was crowned as a creative and talented lady, though many people have criticized her she still stands out to be the best and she did great for having such a thoughtful idea as a way of giving her tribute and contribution in the respect of the great actor.

We should learn to support other people’s talents, Jane did her part in paying tribute which truly shows that she was very supportive of the great actor. People should not criticize such people and mock them for nothing; this is a great talent and it will take the lady to many great places. We also join the whole Hollywood family and the fans of the great actor in paying our tribute to the great actor Fare thee well Chadwick Boseman. WAKANDA FOREVER.