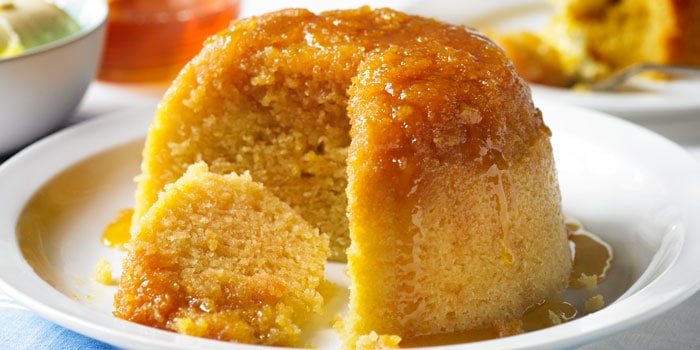 Steamed puddings are antiquated desserts that were common in England before people had proper reliable ovens. Steamed pudding lies somewhere in the middle of the cake–pudding continuum—neither as light and airy as a cake, nor as moist and silky as a modern pudding. I loved its unique texture when I tried it! This recipe is based on the original recipe in the book ‘Anglo-Indian Food and Customs‘ by Patricia Brown. I turned what was originally a carrot steamed pudding into a ginger pudding by adding ginger—both paste and candied. We also changed the proportions to match the sweetness and texture that I wanted.

Steamed puddings are commonly served with a custard sauce—crème anglaise—which I decided to infuse with tea. The idea of a ginger pudding with a tea sauce sounded perfect, and to my surprise, it really works!

Steamed puddings are traditionally made in metal or ceramic pudding basins. Some have lids and some—like the one we are using—need to be covered with a foil and baking paper with a pleat that allows the pudding to expand.

You should try this recipe if you are not afraid to try something new.

FOR THE TEA CUSTARD